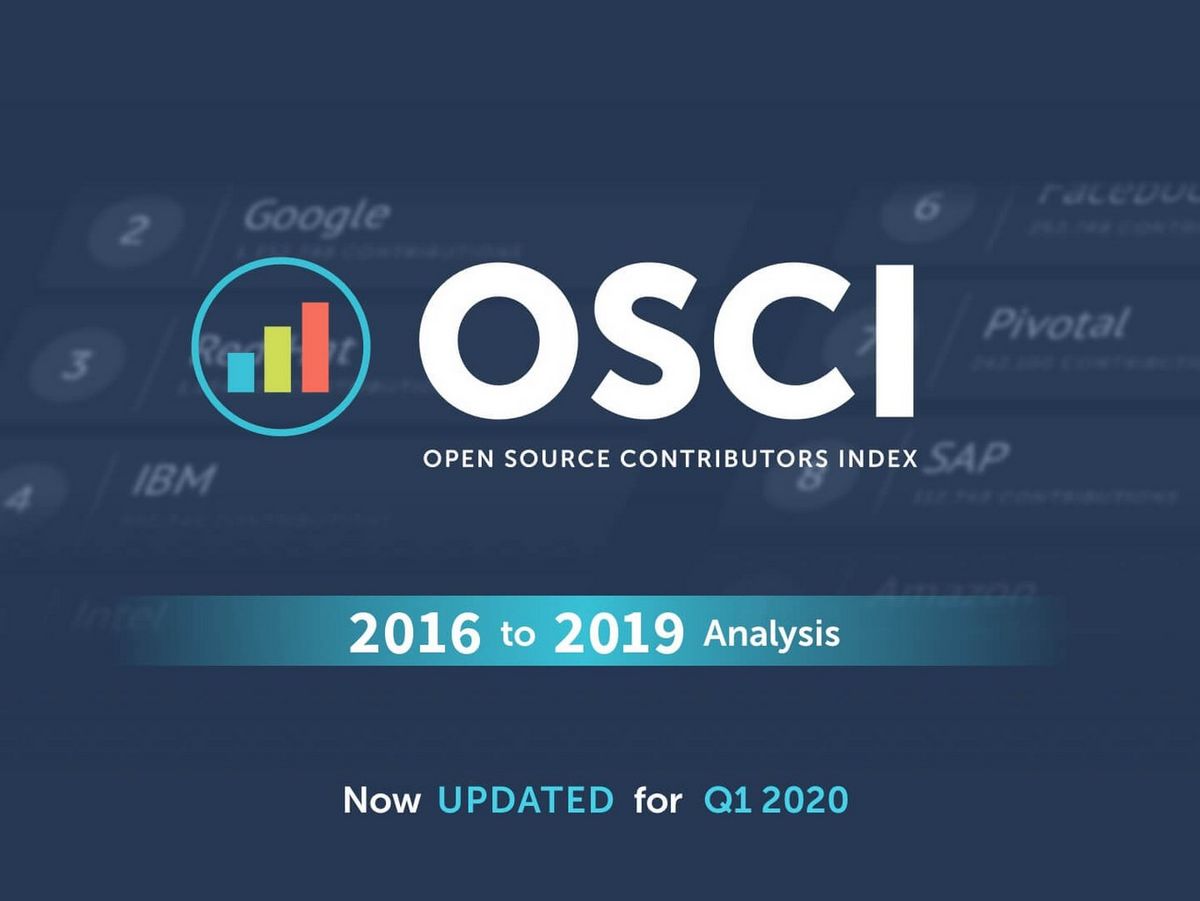 If you enjoy analyzing the monthly Open Source Contributor Index (OSCI) rankings , then you’re going to love our deep dive into the 2016-2020 historical data we’ve pulled from GitHub on which commercial organizations contribute the most to open source. After looking at this data, it’s clear that open source continues to be increasingly important over time and the open source community only continues to grow, as the number of Active Contributors among the top 30 companies in the OSCI has increased by 75% since 2016.

UPDATE: This blog is now updated with analysis for Q1 2020. We keep the original analysis to end of 2019 and supplement with additional commentary on the trends visible in the first part of 2020.

To get started in our findings, let’s break down our methodology that led us to these conclusions: 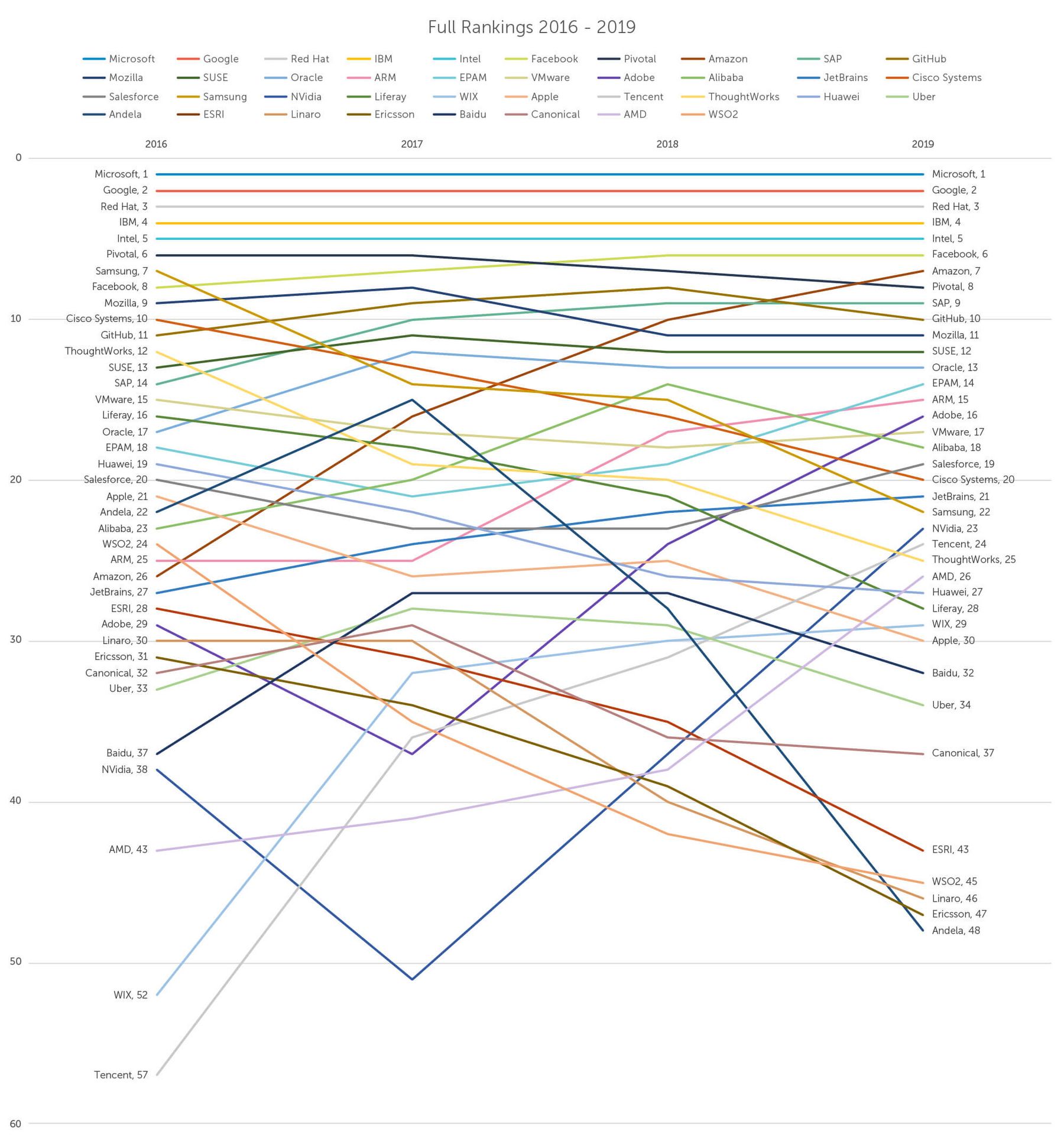 To start, let’s look at all the companies who make it into the top 30 at some point in the past three years. Interestingly, 38 total companies made an appearance, which shows how competitive these rankings truly are. Note that this graph does not show quantity of Active Contributors – just ranking over time. Despite the density of this graph, we can see the relative stability in the companies who ranked highly compared with the volatility of the companies that ranked farther down the list. Let’s break down this data into tiers to better understand what trends we can observe. 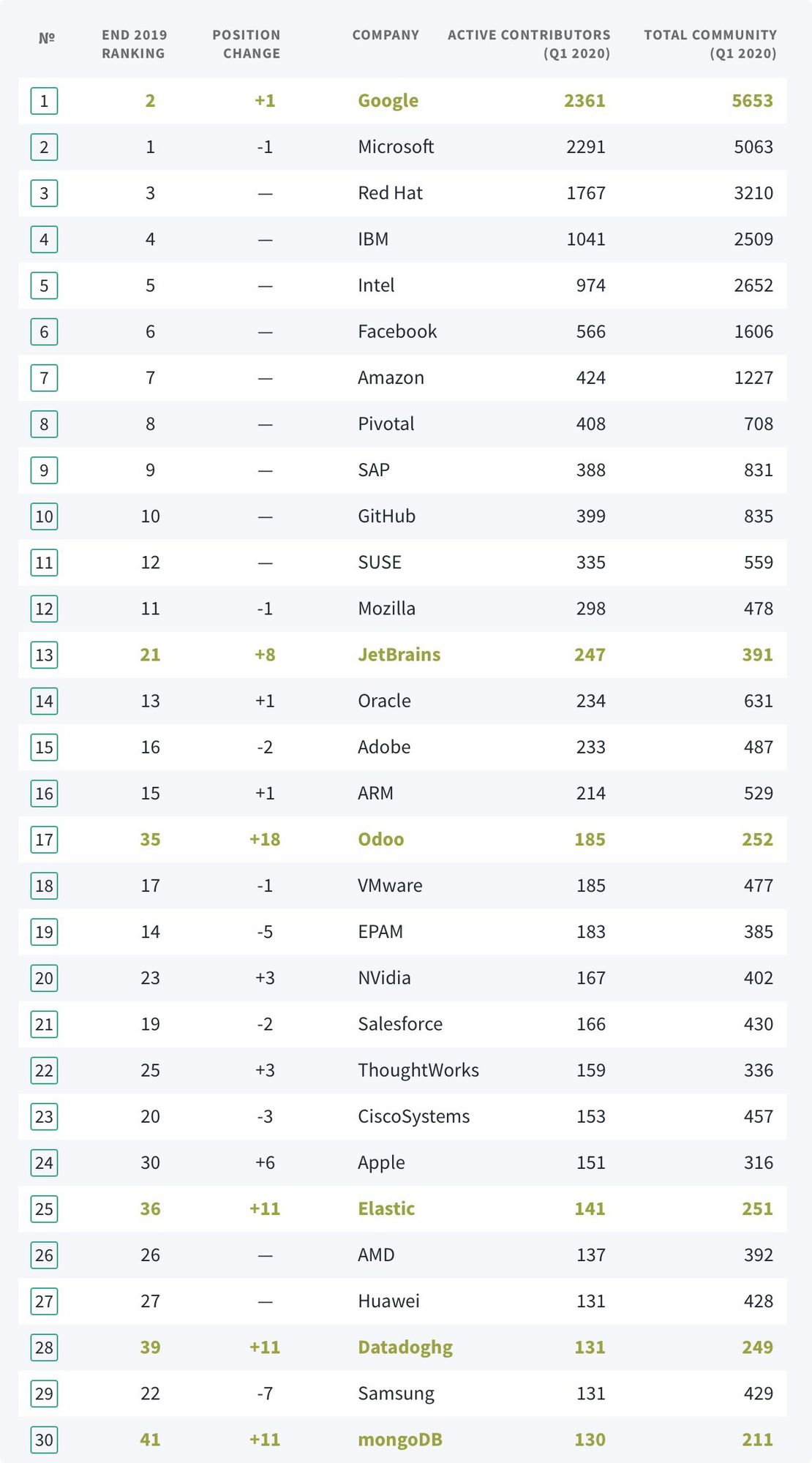 In this table, we observe some notable movements:

Tier 1 is comprised of the top five companies on the list, each having significantly more than 1,000 Active Contributors from 2016 to 2019. Despite an overall uptick in the quantity of Active Contributors, Tier 1 rankings haven’t changed at all since 2016. Microsoft (with a 97% increase in Active Contributors) and Google (99%) have the most notable increases, emphasizing their position at the top of the ranking, while IBM shows the slowest, yet still very significant, growth at 50%. The gap between the second and third ranked companies (Google and Red Hat) has grown over time, unlike the gap between the fifth and sixth companies (Intel and Facebook), which has remained consistent in the last four years. 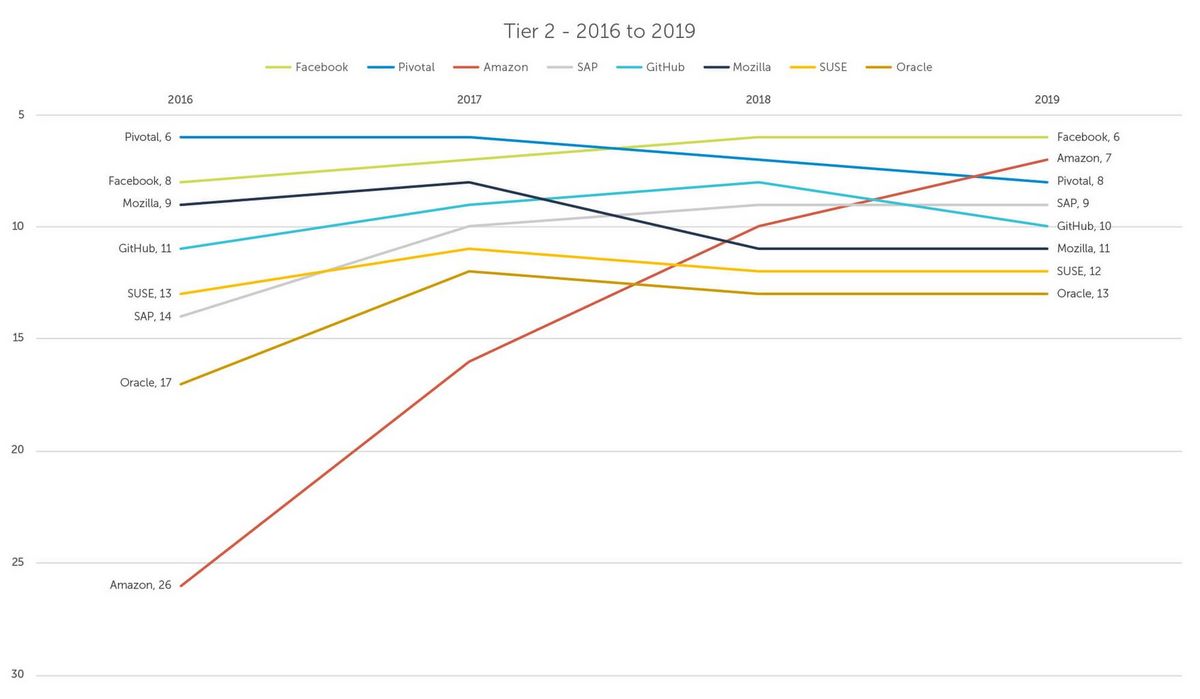 Tier 2 is comprised of the next set of companies and features major IT providers and open source leaders. Amazon had the most significant rise in position, with a major increase in Active Contributors of 421%. SAP (161%) and Facebook (132%) also had dramatic rises in position. Like Amazon, Oracle moved up from Tier 3 to Tier 2 from 2016 to 2019 with an increase of 130%. Companies who stayed in this tier from 2016 to 2019 increased their Active Contributors by an average of 90% over time, which equates to an annual 23.8% growth rate. We can see that Tier 2 still shows relatively low volatility, as the majority of companies in this tier in 2016 remained in 2019 (with the exception of Samsung, Cisco and Thoughtworks). 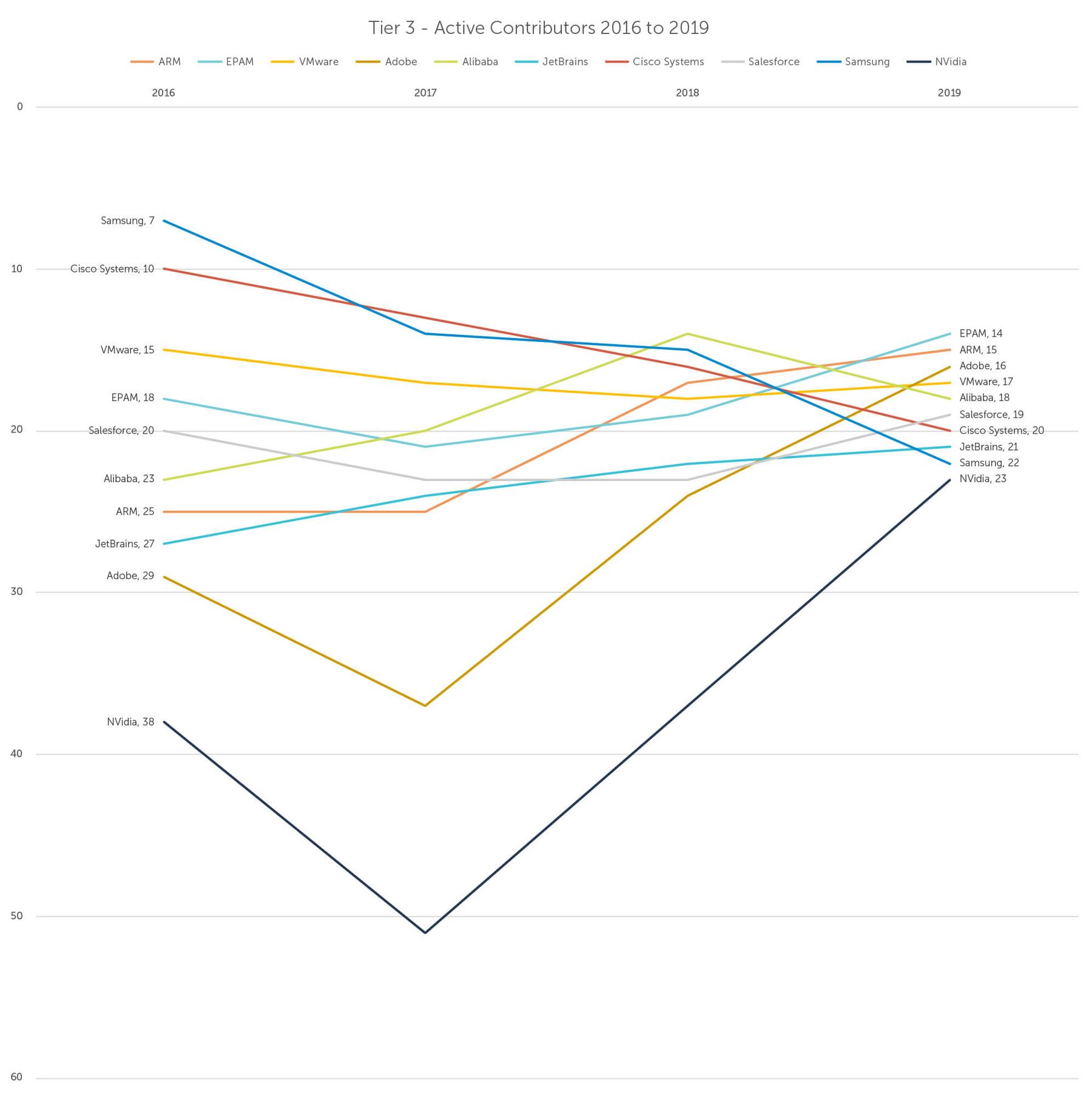 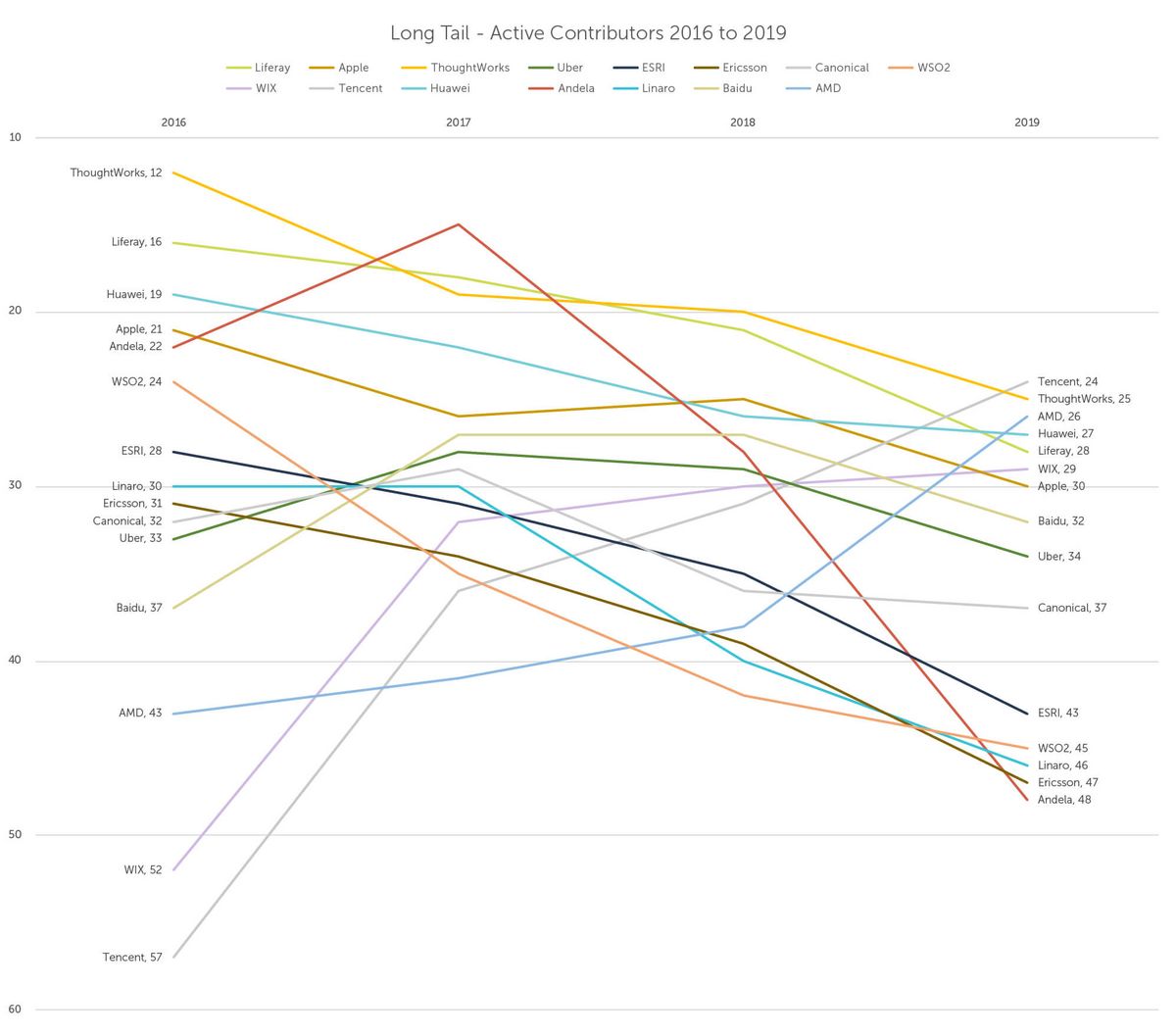 Following the Tier 3 is what we refer to as the Long Tail. This starts at 24th place and continues to the 30th position and is reflected by the much larger fluctuations in this diagram compared to the previous tiers. 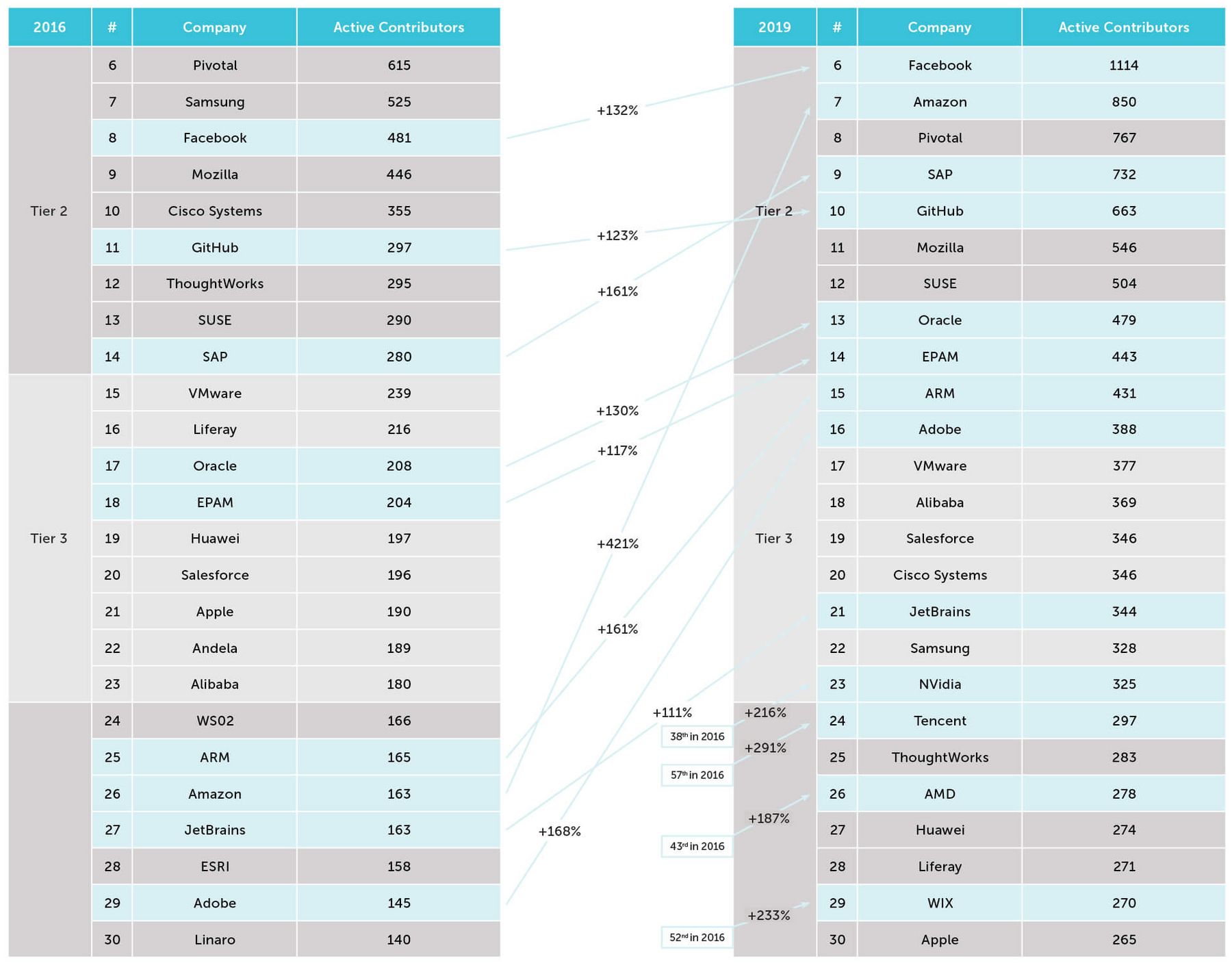 As we’ve shown in the above analysis, it’s clear that a significant increase in contributions to open source projects was necessary for a company to keep its position in the top 30. 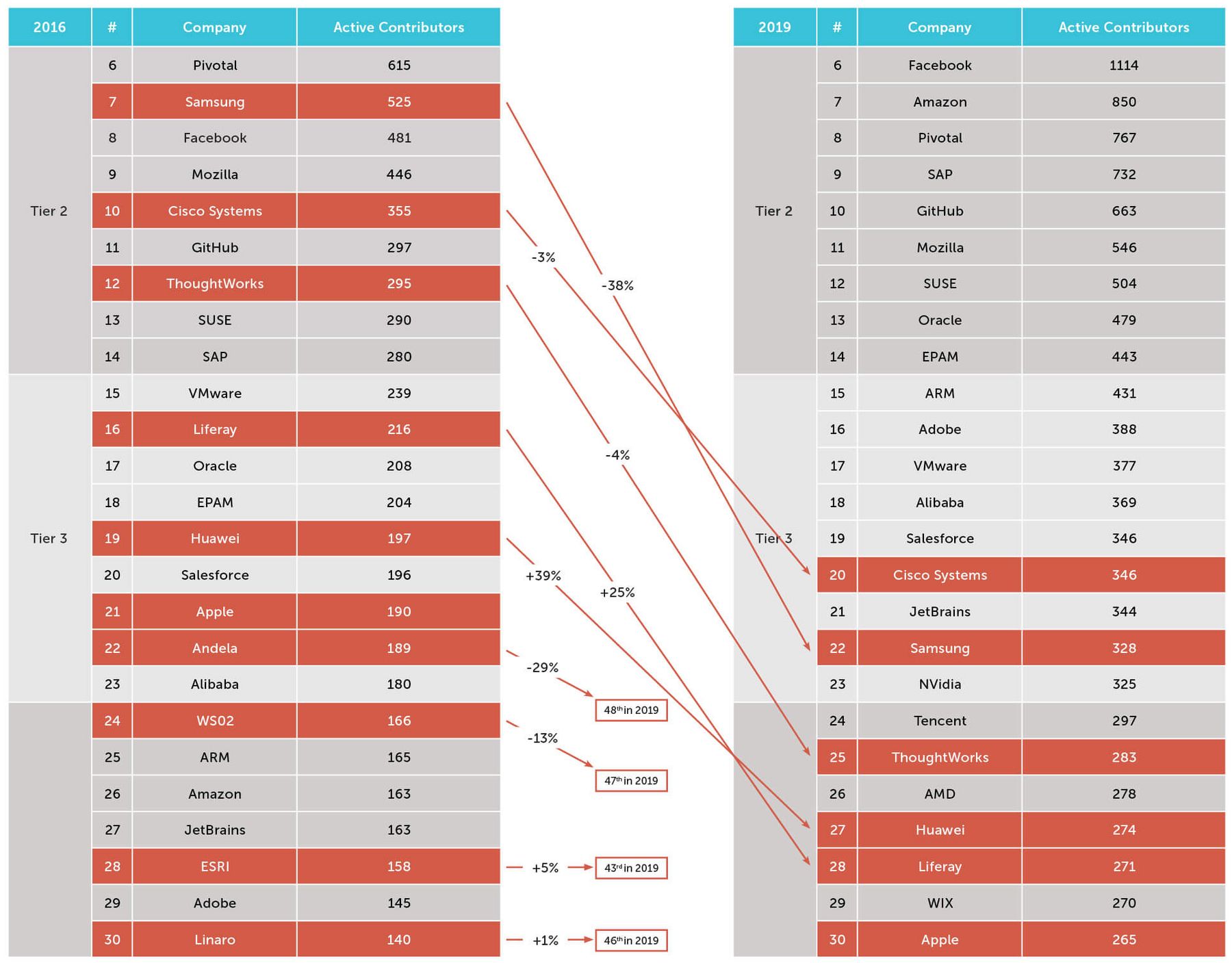 We’d be remiss if we didn’t note the incredible growth that we’ve seen from other companies in their Active Contributors since 2016. While these companies did not rank in the top 30 at the end of 2019, we can expect their position to change, and we’ll likely see a few of them enter the ranking, over the next year. If you are interested in learning more about our methodology or speaking with us, please contact OSCI@epam.com

Patrick Stephens joined EPAM Systems in 2001. In his many years at EPAM, Patrick has worked from various locations, including the UK, US, Spain, Malaysia and Ireland, to deliver projects for some of our biggest clients. His interest in free and open source software (FOSS) and the development of OSCI grew out of seeing how much open source activity is done at EPAM and recognizing the potential to support it. 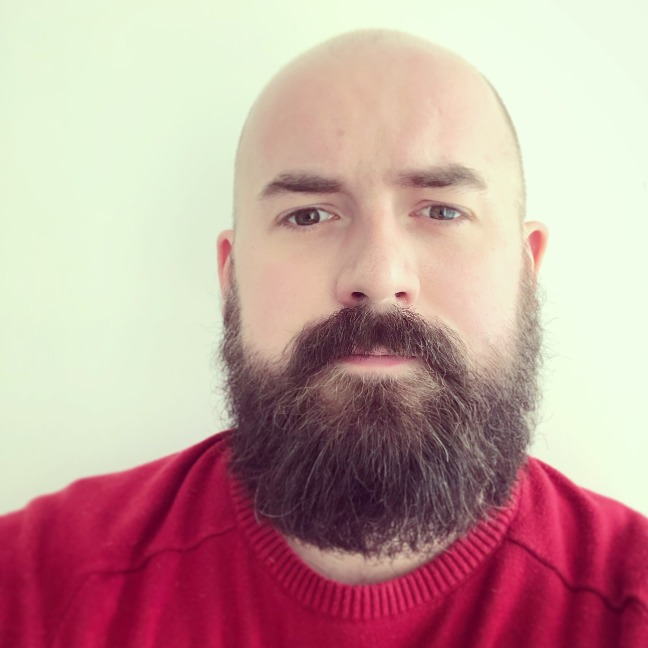 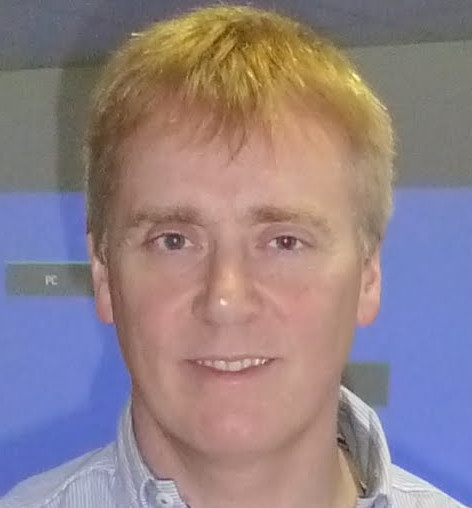 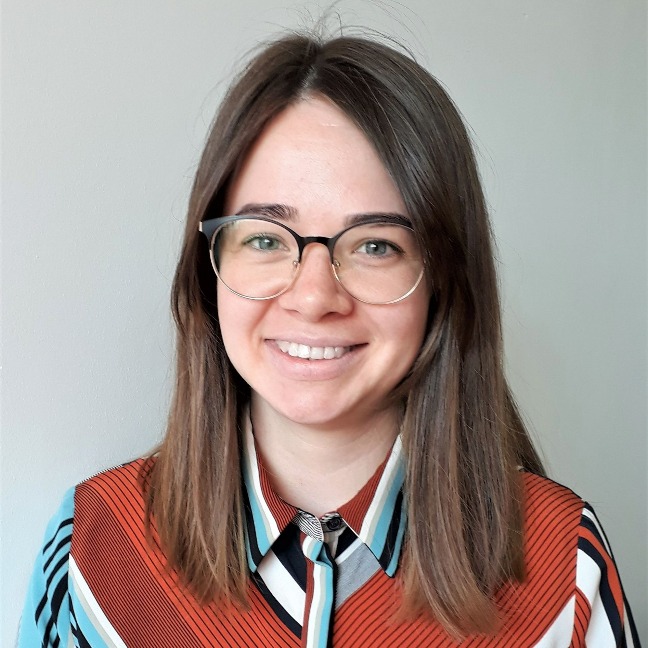